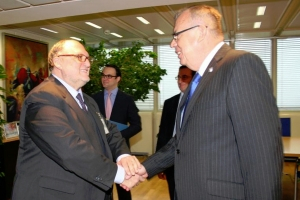 Migliori and Fedotov discussed areas of possible co-operation between the OSCE Parliamentary Assembly and UNODC. In particular, Migliori recalled the need to give full implementation to the Palermo Convention on Transnational Organized Crime and its protocols with the aim of harmonizing national legislations.

President Migliori identified three areas of concrete co-operation: fighting against human trafficking, works of art trafficking and drug trafficking. Fedotov acknowledged the important role the OSCE Police Academy in Tajikistan, a training centre for Afghan border guards, has played in this regard.

The president also visited the OSCE PA Liaison Office where he and Special Representative Ambassador Andreas Nothelle, assisted by Roberto Montella, the Assembly’s director of presidential administration, discussed the follow up to the Dublin Ministerial Council.

The visit was facilitated by Ambassador Filippo Formica, permanent Representative of Italy to the United Nations in Vienna.