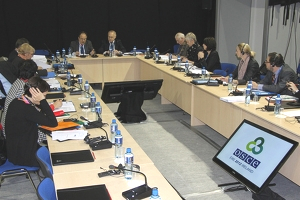 The December Bureau Meeting is the first formal gathering of the Assembly's leaders since they were elected at the Monaco Annual Session. Members will discuss recent election observation missions and hear a report from the Subcommittee on the Rules of Procedure, which has been examining ways to increase the efficiency of the amendment process during the Annual Session.

The Bureau will also vote on how to formally include the Parliament of Mongolia in the Assembly now that the Asian country has been accepted as the 57th OSCE participating State. Based on population, Mongolia is likely to receive three seats in the Assembly, which would increase the Assembly's total number of voting delegates to 323.

Parliamentarians and staff will stay in Dublin to participate in the Ministerial meeting 6-7 December. President Riccardo Migliori will address the foreign ministers Thursday morning. Speeches begin around 9:30 GMT and stream live online.

The Bureau and Ministerial will be held at the Royal Dublin Society (RDS) Simmonscourt Complex.

A two-thirds majority of the votes cast is required for Bureau decisions.

The Ministerial Council is the central decision-making and governing body of the OSCE. The meeting, held annually, provides the foreign ministers of the 57 OSCE participating States with an opportunity to review and assess the Organization's activities during the past year and offer national viewpoints on security matters.