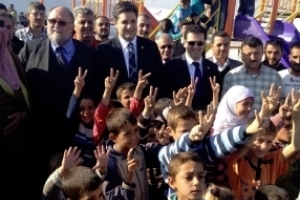 Riccardo Migliori and Emin Onen at a refugee camp on the Turkish-Syrian border.COPENHAGEN, 23 November 2012 – OSCE Parliamentary Assembly President Riccardo Migliori and OSCE PA human rights committee chair Matteo Mecacci conducted a three-day visit to Turkey this week aimed at increasing the international response to the Syrian refugee crisis and other challenges Turkey has been facing.

In a meeting Monday night with Foreign Minister Ahmet Davutoglu of Turkey, Migliori spoke about Turkey's valuable role within the OSCE and its leadership in answering the humanitarian call in the wake of violence in Syria.

"The determination of Turkey to respond to this crisis in a humane fashion has not been overlooked," Migliori said. "For the sake of all those concerned, and especially the refugees fleeing the violence in Syria, I call on the international community to pay appropriate attention to the situation on the Turkish-Syrian border."

Davutoglu told Migliori the OSCE is important for the security and stability of the Eurasian region and he commended the Organization for its contribution to increase international visibility to Turkey's humanitarian efforts. The Turkish government reported spending 400 million U.S. dollars so far to manage the refugee crisis, an effort that Migliori commended as vital in providing proper shelter to the refugees.

During his visit, Migliori discussed other issues of regional interest, including the ongoing conflict in Gaza, the role of the OSCE in the Mediterranean, and the role of Turkey's bilateral relations in helping make progress in frozen conflicts.

While in Ankara, Migliori also signed an agreement with Cemil Cicek, Speaker of Turkey's Grand National Assembly, for the Turkish parliament to host the 2013 OSCE PA Annual Session in July in Istanbul. He also met with Alaattin Buyukkaya, Deputy Minister in charge of EU Affairs and Omer Celik, Deputy Head of Foreign Relations for the Justice and Development Party.

On Wednesday, Migliori and Mecacci, accompanied by Emin Onen, head of Turkey's delegation to the OSCE PA, visited a refugee camp in Akcakale on the Turkish-Syrian border, where they visited a hospital, school and other facilities. They were briefed by the manager of the camp, which accommodates 17,000 refugees, including 4,000 children.

Migliori and Mecacci were very impressed by the management of the camp, which they described as a model, and pledged that the OSCE PA will support enlisting OSCE participating States to assist Turkey's efforts. Currently, the Akcakale camp is operated by a crisis unit within the prime minister's office.

The delegation also crossed the Syrian border, where they were greeted by rebel authorities who now control the Syrian side of the border.