Despite a highly polarized campaign and concerns over the role of unlimited private campaign funding, the 6 November 2012 general elections demonstrated the U.S. commitment to democracy 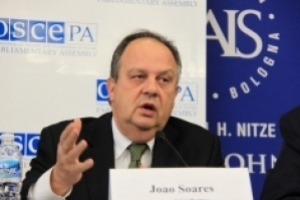 WASHINGTON,  8 November 2012 -- The 6 November 2012 elections in the United States were yet another demonstration of the country's commitment to democracy, international observers from the OSCE Parliamentary Assembly reported in a statement released today in Washington.

After a generally peaceful but highly polarized campaign, voters were given a genuine opportunity to make an informed choice. Nonetheless, the unprecedented and often negative role played by private campaign financing showed the potential to impact negatively on the fairness of the electoral process.

"These were the most expensive elections in U.S. history, and although this cash flow did not create an uneven playing field, it could have a negative effect on the factual independence of elected politicians," said Joao Soares, the Special Co-ordinator who led the OSCE short-term election observation mission and the Head of the OSCE Parliamentary Assembly delegation. "It is also troubling that many political ads did not reveal the source of their funding, thereby undermining transparency and accountability in the elections."

The observers lauded the professionalism of the U.S. election administration but pointed to capacity problems at some polling stations. They also noted that the decentralized and highly diverse electoral system continues to lack country-wide standards, creating vulnerabilities in the system.

In addition partisan controversies over electoral legislation – including voter identification, voter registration, and early voting – had a tendency to reduce confidence in the process. OSCE PA observers encouraged further debate to develop more uniform standards within the U.S. election system.

On Election Day, citizens cast their votes in a calm and orderly manner, and observers witnessed the great trust all stakeholders placed in the electoral process.

"Voters and election officials are aware that the U.S. electoral system is not perfect," explained Joao Soares. "But this culture of trust enables election administrations to test new procedures and learn from each other's good practices."

The OSCE PA's election observation mission assessed the U.S. elections for their conformity with the 1990 Copenhagen Commitments, to which the United States has subscribed. The 100 observers included 73 parliamentarians from 26 countries. They began on-site observations on 1 November and were deployed to Virginia, Maryland, Pennsylvania, North Carolina, and the District of Columbia.

Short-term OSCE observers were largely well received and – with one exception - got access to polling stations as well as all the assistance they requested.