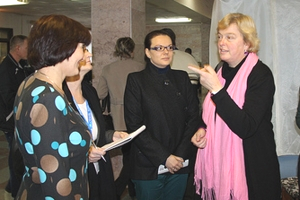 Walburga Habsburg Douglas at a polling station in Kyiv.KYIV, 29 October 2012 – Ukraine's parliamentary elections were characterized by a tilted playing field, the international observers concluded in a statement released today. This was the result, primarily, of the abuse of administrative resources, as well as a lack of transparency in campaign and party financing and of balanced media coverage.

Voters had a choice between distinct parties and candidate registration was inclusive, with two notable exceptions, representing a wide variety of political views. The political environment, however, is dominated by powerful economic groups, to the detriment of the electoral process, the statement said.

"Considering the abuse of power, and the excessive role of money in this election, democratic progress appears to have reversed in Ukraine," said Walburga Habsburg Douglas, the Special Co-ordinator who led the OSCE short-term election observation mission and the Head of the OSCE Parliamentary Assembly delegation. "One should not have to visit a prison to hear from leading political figures in the country."

"Ukrainians deserved better from these elections. The 'oligarchization' of the whole process meant that citizens lost their ownership of the election, as well as their trust in it" said Andreas Gross, the Head of the Parliamentary Assembly of the Council of Europe (PACE) delegation. "Unfortunately, the great democratic potential of Ukrainian society was not realized in yesterday's vote."

Election day was calm and peaceful overall, and the voting and counting was assessed mostly positively by the observers, but tabulation was assessed negatively, as it lacked transparency.

The election administration managed the technical aspects of the pre-election process adequately, but routinely held pre-session meetings behind closed doors, and most open sessions lacked substance.

"Yesterday, we witnessed a strong turnout and a well-conducted polling process. The positive engagement of the Ukrainian people shows their steadfast desire for democracy, and this bodes well for Ukraine's future," said Assen Agov, Head of the Delegation from the NATO Parliamentary Assembly "We all hope that the disappointment of our overall assessment will galvanize political stakeholders into delivering the democratic progress which Ukrainians clearly seek."

"The lack of appropriate responses by the authorities to the various electoral violations has led to a climate of impunity." said Audrey Glover, the Head of the OSCE Office for Democratic Institutions and Human Rights (OSCE/ODIHR) long-term election observation mission. "This has cast a shadow over the election and the democratic progress that, until recently, Ukraine had been making."