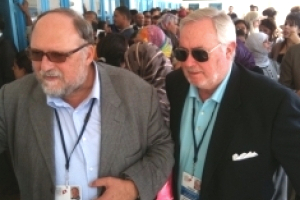 TUNIS, 24 October 2011 – International election observers from the Organization for Security and Co-operation in Europe Parliamentary Assembly today declared the first democratic elections in Tunisia as "free and fair" and praised the Tunisian people for their participation in the electoral process.

"The elections laid a first solid corner stone for future democratic institution-building," said Riccardo Migliori (Italy), who headed the OSCE PA observation mission. "In this early phase of democratic transition, only months after violent protests, we saw genuinely free elections. My colleagues and I could not witness any widespread or systematic irregularities."

Observers said the campaign for the Constituent National Assembly was marked by fair media coverage, giving voters a chance to make a genuine choice from the large number of party lists that included more than 11,000 candidates. Election day voting was seen as calm and orderly and the counting of votes generally viewed as honest.

Observers did cite restrictive policies on public advertising, the exclusion of followers of the authoritarian regime from the elections, and an imperfect voter registration system as issues in need of addressing to comply with Tunisia's international obligations under the International Covenant on Civil and Political Rights as well as national legislation.

"These elections demonstrated the will of the Tunisian people to send out a clear and promising signal that the country is on its way to guaranteeing freedom, human rights, and a democratic rule based on good governance and controlled by an independent judiciary," said Migliori.

The 75 OSCE PA observers from 21 OSCE participating States and Algeria observed voting in Djerba, Gafsah, Hammamet, Kairouan, Nabeul, Sidi Bouzid, Sousse, Tozeur, and Tunis. Tunisia is a partner for Co-operation of the OSCE, which is the world's largest regional security organization.